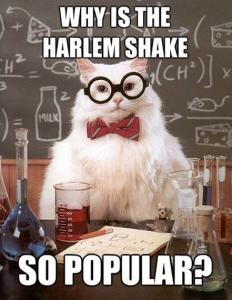 I’m sure you have watched the viral phenomenon known as the Harlem Shake. If not, where have you been? Here is a sample of the crazy dance that has spread throughout YouTube. The viral video theme involves a group of people in a video where one person starts to dance, usually with a mask of some sort, while everyone else ignores them. As the song progresses and the bass drops, everyone in the shot starts to break out dancing in some crazy manor. Pretty funny stuff.

Viral happenings such as the Harlem Shake are important to take note of. With a viral happening, comes hundreds of thousands of searches for that viral video. Why not capitalize on these searches? Companies such as Google took advantage of the Harlem Shake and were able to get 500,000 views. That’s a lot of exposure for a simple video that only lasts 30 seconds and cost almost nothing to make.

With the Harlem Shake being one of the first major viral video that brands latched onto and imitated, it makes you wonder why they did not do this before? Companies that have little brand awareness can simply take hold of some viral views and become a recognized brand overnight, and almost no funds needed!

Granted, the Harlem Shake videos are slowing down and are progressing out of the spotlight recently, but that does not mean that the major brands can not actively look for that next viral piece of gold that they can use to boost their brand awareness. Until that happens…DO THE HARLEM SHAKE!